Sets are a fundamental part of mathematics and it’s knowledge is very important in present. It defines the concepts of relation and functions. These functions are also very essential for present day maths.

Sets are denoted by capital letters. They are similar to matrices whose elements are denoted by small letters. But in sets an element comes only at once. Sets are matrices which give a sense of belonging. This sense of belongingness is represented by ∈  .We can write anything in a set like rivers of India, Wonders of the World .etc.
For an example let there be a set of positive single digit. Let the set be denoted as A
Therefore, 8 ∈ A
Also we can write, 17 ∈ A
Set can be represented by two types

In roster form we write elements in curly brackets and separate them with comma.
If there be set of positive integers less than 10. Therefore the set will be {1,2,3,4,5,6,7,8,9}

INTERVAL AS SUBSETS OF SETS OF REAL NUMBERS
Let a, b ∈ R. Let a set is in the form
{y: a<y<b}
Then this is known as an open set which means that ‘a’ and ‘b’ are not included in the set. Such sets can be written as (a, b) with curly brackets.
If ‘a’ and ‘b’ are included in the set then we write [a, b] with square brackets
There can be set known as the semi-open set. In this set it is open at one end and closed at the other. Like … [a, b)…closing at ‘a’ and opening at ‘b’ or …(a, b]… opening at ‘a’ and closing at ‘b’
This can be represented in a number line with the help of filled and unfilled dots. Filled dots for closed and unfilled for opened

POWER SET OF A SET

Out of given number of set if there is a set such that every other set is a subset of it then it is called a universal set
If there is are sets A, B, C, D
Such that A ⊂ D, B ⊂ D, C ⊂ D then D is the universal set. It is represented by ‘U’ 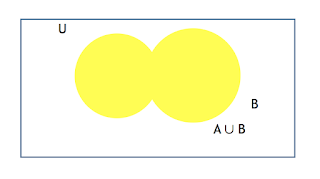 The colored region is the desired set.
INTERSECTION OF SET
Intersection of set is a set which have only the common elements of the two sets
It can be represented by , A ∩ B