You know the classic magician’s trick in which he makes something or somebody levitate? Yeah well, it isn’t magic (obviously!). In fact, there are over 8 different ways in which he can make something levitate.
As a side note though, all of the following methods are fairly complicated. In all honesty what he actually probably does is hang the “thing” by a string. You got conned…

What is Levitation?
Levitation is flying’s younger brother who was ignored when his elder brother became possible. It’s a sad story…
Though in all seriousness levitation and flying are different. So please don’t be a jerk and post a comment saying, “Hey you relic! Levitation is already happening. Have you never sat in a plane before?!”
Levitation is (according to Google) and I quote “the action of rising or causing something to rise and hover in the air, typically by means of supposed magical powers.” Way to go Google! I thought we already cleared up that fact that magic isn’t real. So basically levitation is an object which is not in contact with anything, suspended above the ground.
OK fine I will give you what you came for “How to make things levitate?”

P.S. If you came here thinking that you could use one of these methods for your science fair, I suggest you turn back now. These are methods that geeky scientists use in their sci-fi labs so you will be disappointed

Yay! Magnets are finally good for something! This method is probably the most commonly used to make things levitate. Remember crazy Japanese Maglev (Magnetic-Levitation) Trains? They work off the same principle. 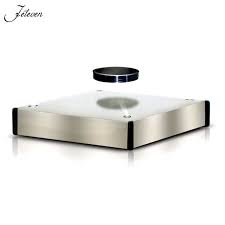 Magnets can repel and attract each other right? So a very simple way to imagine magnetic levitation is if two dipolar (Two poles) magnets are placed repelling one another and one of them “levitating” above the other as a result. Don’t get it? Just look at the image.

The biggest problem with this is that the top magnet is not stable. It will topple over. Open challenge: Go ahead try and balance one magnet over another.

So as you may realize it isn’t very easy to do so. In fact, it is impossible, or so the guy who proposed this theory, Samuel Earnshaw thought. He even made a theorem, Earnshaw’s theorem on it. But along came a German fellow named Werner Braunbeck and proved him wrong. (Earnshaw’s theorem still holds true, but only for paramagnetic materials. More details later)
Braunbeck showed that if a diamagnetic material is placed atop a certain magnetic field it can levitate. Link for video showing this:
https://youtu.be/IFv4VOrWecI

That probably did not make a lot of sense but it is the best I can do without writing a whole other article.

Moving on, that was the very basic homemade levitation. Humans can’t settle for that! So we took it a step further and used a bitter electromagnet to make a big natural body rich in water (water is diamagnetic so it worked for this experiment) levitate. What was that body you ask? A frog! Link:
https://youtu.be/mOt-rYBu0gg

That is essentially how Magnetic Levitation is used. There have been a few tweaks and changes which have been made to these techniques but the core principle is the same. I can’t be bothered with explaining it exactly but if you really want to know more just look up “Electromagnetic and Electrodynamic suspension” The link for the Wikipedia pages:
https://en.wikipedia.org/wiki/Electrodynamic_suspension
https://en.wikipedia.org/wiki/Electromagnetic_suspension

As far as applications go, levitation is cool need I say more? Just kidding! The super-fast Maglev trains which go up to 604kmph work on this principle. They are basically suspended using electromagnets. This eliminates most of the friction with the ground and helps them move faster. Other things like magnetic bearing also work on this principle.
There is another really cool video not directly linked to magnetic levitation but somewhat similar. Anyhow it is amazing. I would highly suggest checking this one out!
https://www.youtube.com/watch?v=txmKr69jGBk
https://www.youtube.com/watch?v=pCON4zfMzjU

Did I say one? I am sorry, there actually two!
That entire thing was Magnetic Levitation.
But since this article has already become fairly long and I have a lot more of stuff about levitation. So for other cooler methods check out part II!