To be completely honest I was going to start this with a pun. I did think of one but it doesn’t float…

I am sorry I just had to.

Anyway, this is the second part to the article on super cool ways of making things levitate. Go check the first part out if you haven’t already. Actually, the first part may have become repulsive with all the magnets and stuff, but I promise this will be more attractive. Get it? No? I’ll stop now.
I am just going to jump straight into it.

I know you are probably sick and tired of magnets but they are the best way you know… This method is somewhat similar.
You remember that cool science experiment you did with two straws attracting or repulsing each other based on their charge? So basically using the same principle we can make a charged object levitate.

But before you try it, let me tell you it won’t be easy. Even impossible according to our Mr. Earnshaw. He even made a law (the law is actually true) stating that you can never find a stable equilibrium point where the charges completely counteract each other, so the levitating effect created my magnets, electrostatic forces (those are somewhat similar) will be “chaotic” unworthy to be called levitation in the eyes of a true physicist. And then he twirled his mustache. Just joking, I made that last part. Just checking if you are still awake.

But the other physicists did not shy away. Any coders here? If yes, then you know what a Feedback Loop is right?

(For the non-coders, a feedback loop is something that sort of fluctuates, giving rapidly changing commands taking into the system’s output into consideration to achieve the desired outcome)
So the scientists basically created a feedback loop to detect the object’s position (if it was too high or too low) and manage the charge accordingly.
Watch the video!
https://youtu.be/li5l1Wmewf0

This is probably the most intuitive way. Ever seen a floating table tennis ball on a hairdryer? Yup that is a perfect example. If you haven’t ever seen that, get a life dude/dudette. But seriously do it for yourself. Unlike the other things this is not a trap, you can actually do it! 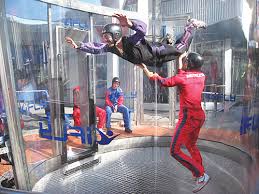 Helicopters, Air hockey tables both work on this principle as well. The super cool wind tunnel type things that make it as if you are skydiving also use this. So you can technically levitate. Unlike the other methods this one is actually being used and has applications.

Also just so you know, Gas film Levitation and this are practically the same. There is a little bit of difference but let us avoid going into those details…

This is sort of a cheaty one. Helium balloons are sort of similar. Helium balloons rise up because helium is lighter than air. So imagine if there was a point where suddenly air stops and helium starts. If you keep a box (Since this is physics, we are allowed to assume that the box has no mass) filled with Helium at that point, it would appear as if the box is floating.

Whoa! I suck at explaining… Let me make this simple. Paper floats on water. Floating and levitation are essentially the same thing. We just don’t call floating as levitation because the object is in contact with the ground via water. Technically when anything levitates it is also in contact with the ground through air… Riddle me that Science!
I googled, I was wrong. Levitation is called such if it is possible in a vacuum. Therefore we can call magnetic and electromagnetic and all other methods as true ways to achieve levitation as vacuum or not, it does not affect them.

Coming to this method, if you have a gas with a different density than that of air, you can achieve levitation (not scientifically though since this won’t work in a vacuum where nothing is between the object and the ground)

This video should help understand. It shows a light open box seemingly “levitating”. The truth is it is floating on xenon (gas with high density) which is heavier than air so it does not leave the transparent container.
https://youtu.be/l3EX0vEfFKU

Another method that can be used to create levitation is difference in density of air molecules in an area, creating a pressure that could make an object levitate. The only problem is that since it relies on a sort of contained area or some sort of support it is not exactly true levitation. It’s called pseudo levitation (pseudo meaning false). There is something known as a vacuum elevator that could help explain it. Just watch the following video because I realize I did not make a lot of sense.
https://youtu.be/5ullKA0eUoo

Just as a side note, this method relies on buoyancy of air. Hence the name.
As usual I have crossed the word limit so I am going to have to leave you here and leave the coolest parts for the next article. I sincerely hope this was more interesting than just magnets and if you don’t agree, nothing you can do about it. #getrektm8

February 12, 2017
So, this is my second post on trigonometry. In this post we're gonna cover the reciprocal and the inverse Trigonometric functions. If you haven't seen my first post you should definitely view it as it covers the basics of Trigonometry The Reciprocal Trigonometric Functions The reciprocal Trigonometric function of Sine is Cosecant, of Cosine is Secant & for Tangent it is Cotangent. Cosecant (Csc θ = 1/Sin θ) or (Hypotenuse/Opposite) Secant (Sec θ = 1/Cos θ) or (Hypotenuse/Adjacent) Cotangent (Cot θ = 1/Tan θ) or (Adjacent/Opposite) We can also represent Tan θ in another way. As Tan θ = opposite/adjacent  & Sin θ = opposite/hypotenuse  & Cos θ = adjacent/hypotenuse ∴ Tan θ = Sin θ/Cos θ (The hypotenuses cancel out) As Cot θ = 1/Tan θ  So, we can also represent Cot θ as Cos θ/Sin θ.
1 comment
Read more

February 06, 2017
Rutherford Alpha Ray Scattering Experiment Hey, Guys, most of you might have heard about the alpha ray scattering experiment and if you want to know in detail about Rutherford's model and the experiment he conducted, this is the right place for you... But first: Things You Must Know Some basic information that will help you understand rutherford experiment properly: Proton is a sub-atomic particle which is positively charged and has a mass of 1u. Alpha particles are helium atom with a charge of +2 as they have lost 2 electrons. Alpha particles have an atomic mass  of 4u. Gold is highly malleable and can be beaten into very thin sheets. Experiment Rutherford conducted his experiment in the following way: Rutherford took a very thin gold foil and bombarded it with high energy alpha particles. He placed a layer of zinc sulphide on the walls where the experiment was taking place because when alpha particles strike zinc sulphide layer, it results i
18 comments
Read more

March 27, 2017
UEFA CHAMPIONS LEAGUE Europe's biggest club soccer competition, The UEFA Champions League, takes place every year. The competition begins in September and ends in May. It is a classic tournament following a round-robin format after which the top teams qualify to the knockout stages. It includes 32 best clubs in different countries of Europe. Obviously teams from major countries like England, Spain, France, Germany and Italy qualify easily while teams from smaller countries like Ireland, Austria, Netherlands, Denmark have to go through a qualifying round. The teams who win the leagues in their countries qualify directly while in some countries even the second, third and fourth placed teams also qualify. Sometimes a team may qualify in the Champions League because they finished in the top-four. These clubs may or may not qualify through their leagues but their good performance may help them qualify. Even the champions of The UEFA Europa League, another prestigious league
Post a comment
Read more