Acceleration Due To Gravity (g)

Acceleration Due To Gravity (g)

Effect of The Shape of Earth on 'g' 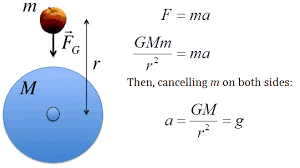 1) IF THE OBJECT IS ABOVE THE SURFACE OF THE EARTH,

As a final note, we also have to remember that 'g varies at different celestial bodies as well