The scene starts in the future, where  Suneo and Gian are talking to president Dekisugi and watching the T.V which features Nobita leading the robotics department of Japan. The trio think of inviting Nobita to the Presidents house but Dekisugi denies it… They were talking about their past days when they recall Doraemon… Gian gets annoyed at his name because he thinks that Doraemon suddenly disappears into the future… Dekisugi tries to explain Gian about how Doraemon disappeared…


The scene suddenly shifts to Nobita’s house where Doraemon is reading a comic as usual…Nobita enters and starts complaining about Gian and starts crying … Doraemon tries to console Nobita but suddenly stops speaking and remains still as if a statue.   Nobita gets annoyed and pushes Doraemon hard… He then realizes that there is something wrong with Doraemon .. Luckily he finds the time T.V next to him… He places a call to Dorami. He explains Dorami about Doraemon … She looks frightened and tells Nobita that he is out of battery. Nobita sighs and says that we can replace his battery and finds it very simple…Dorami in a deep tone says that the old style  cat robots have a memory backup in their ears.  Since Doraemon has no ears  his memory wont be backed up and he will forget everything …  Nobita looks frightened and could see doraemon and his relationship coming to an end. He then says he can start a new life with doraemon but pleads to bring him back to life… Dorami receives a phone call she gives a more frightened expression and tells Nobita that the time patrol has prohibited intervention with their era. 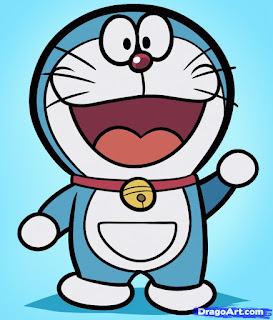