June 24, 2017
messaging and texting is becoming a very easier and easier process nowadays as our typing speed has increased and delivering time is decreased.Speed entirely depends on us but ever wonder what actually happens to your typed message after you press a sent button. If not then its wonderful because today in this one we are going to discuss abut the same.

So lets get started.

Actually the full path of your message after you have of-course typed it and press the send button can be simplified into a simple process which include many entities with different tasks to perform. 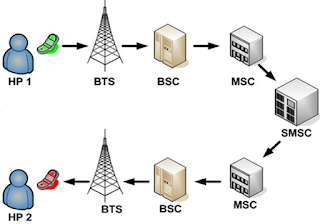 well yes! that`s pretty much of the process and for the time being we would be continuing TO understand the same. 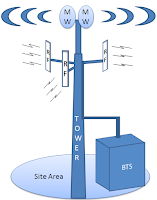 BASE TRANSCEIVER STATION or BTS - {also known as cell sites}They are towers which are currently present in hundreds in your city or even more and there is a reason for that. Actually the role of these towers is to collect the message from HP 1. Hence HP 1 may be present in a huge number so to service each and every subscriber there number has to a larger one.After the collecting the message or text it being send to BSC. 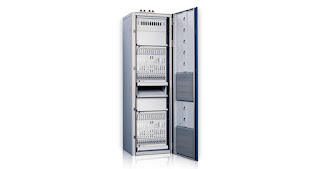 BASE STATION CONTROLLER or BSC
+
MOBILE SWITCHING CENTRE or MSC

-  BSC key work is to control one or more     BTS. Their key function includes working with MSCs and    fulfilling their capacity requirements. BTS and MSC communicate with each other as data must be managed otherwise it will lead information overflow and MSC would not be able to work properly. BSC manages MSC activity requirements so that it can handle more critical and typical tasks such as traffic balancing and data management.

SHORT MESSAGE SERVICE CENTER or SMSC- It can be further divided into-
Home Location Register (HLR) and Visitor Location Register (VLR) basically it contains databases  which store all the information about the all the network subscribers particularly the senders in SLR  and receivers in VLR of the text message.If the sender and the receiver are correctly identified then  your message or text is identified as sent but if for some reason the message was unable to go then it  is temporarily stored in the SMSC for around 5-6 hours during this time period if the message was  able to go then it reaches the receiver and if not ten it actually flooded from the SMSC. 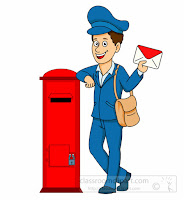 So that was all guys about the explanation of text topology, hope you liked it.
Questions, suggestions and comments are always welcomed in the comment box down below.
thanks for reading,
as always,
PEACE.

August 03, 2018
LEVITATION II To be completely honest I was going to start this with a pun. I did think of one but it doesn’t float… I am sorry I just had to. Anyway, this is the second part to the article on super cool ways of making things levitate. Go check the first part out if you haven’t already. Actually, the first part may have become repulsive with all the magnets and stuff, but I promise this will be more attractive. Get it? No? I’ll stop now. I am just going to jump straight into it. 1.    Electrostatic Levitation I know you are probably sick and tired of magnets but they are the best way you know… This method is somewhat similar. You remember that cool science experiment you did with two straws attracting or repulsing each other based on their charge? So basically using the same principle we can make a charged object levitate. But before you try it, let me tell you it won’t be easy. Even impossible according to our Mr. Earnshaw. He even made a law (the law is
9 comments
Read more

May 22, 2020
Cells Cells are the basic functional, biological and structural unit of life. The word cell is a Latin word meaning ‘small room’. Cells are also known as building blocks of life.  The branch of science that deals with the form, structure, and composition of a cell is known as Cytology. All organisms around us are made up of cells. Bacteria, ameba, paramecium, algae, fungi, plants and animals are made up of cells.  Cells together form tissues. And tissue together makes an organ. History Of Cell The cell was discovered by Robert Hooke in 1665. He assembled a simple microscope and observed a very thin slice of cork under his primitive microscope. The cork was obtained from the outer covering of a tree called bark. Robert Hooke observed many little-partitioned boxes or compartments in the cork slice. These boxes appeared like a honey-comb. He termed these boxes as the cell. He also noticed that one box was separated from another by a wall. What Ho
18 comments
Read more

January 21, 2017
Everyone wants to play a game like GTA on iPad, it is easy on a computer to download such games but difficult on smart devices like iPad, tablet,  or smartphones. We can buy them but not everyone can buy games. But no worries guys there is a solution to this problem where one can have fun of playing games without spending their precious money .(underlined apps have downloading links  given at the end) iOS There many apps through which you can download these paid games for free. Also, there are many sites for the same. One of the most helpful apps is a Chinese app.It is called haimawan. If on a ios device, then you just have to click install which will redirect to settings  add a profile  and boom enjoy it as you wish . but it does not always work, it might work for few days and then the verification problem which may not cure. One more app is tutu which is a fantastic app and always work (99.9% sure .. nothing is perfect). X cross was the perfect app but is closed now an
8 comments
Read more

August 03, 2018
2-D & 3-D GEOMETRY We all have some amount of geometry. We know that any line can be represented on the Cartesian plane. Any figure can be drawn on it. But can we represent a 3-d object on it. Yes we can. A Cartesian plane has 2 axis. While representing in 3-D we need to add a third axis. This axis does not come in between the axis or in the same plane. It appears to be coming out of the paper as we cannot represent a 3-d object on a 2-d surface. This new z-axis represents a line coming out of the screen. Before understanding 3-d geometry you need to imagine this axis coming out of the screen.  REMEMBER : all the three axis are perpendicular .i.e there an angle 0f 90 between them and they meet at the origin If you are unable to imagine you can take a thick book as an example. Any corner becomes it origin and the three edges as the three axis REPRESENTING 3-D GEOMETRY Like in 2-d geometry we represent the value of the different axis as (x,y) we use the same m
3 comments
Read more

August 03, 2018
LEVITATION You know the classic magician’s trick in which he makes something or somebody levitate? Yeah well, it isn’t magic (obviously!). In fact, there are over 8 different ways in which he can make something levitate. As a side note though, all of the following methods are fairly complicated. In all honesty what he actually probably does is hang the “thing” by a string. You got conned… What is Levitation? Levitation is flying’s younger brother who was ignored when his elder brother became possible. It’s a sad story… Though in all seriousness levitation and flying are different. So please don’t be a jerk and post a comment saying, “Hey you relic! Levitation is already happening. Have you never sat in a plane before?!” Levitation is (according to Google) and I quote “the action of rising or causing something to rise and hover in the air, typically by means of supposed magical powers.” Way to go Google! I thought we already cleared up that fact that magic isn’t rea
2 comments
Read more
Follow @bhaveshjain8751