March 27, 2017
Hi guys, this year Apple has its 10th iPhone anniversary and Apple would be releasing the best iPhone ever, a phone that would be much advanced than all its competitors, it would be the best looking phone available in the market... In this article, i would be covering all the leaks and rumours related to the iPhone 8!!! 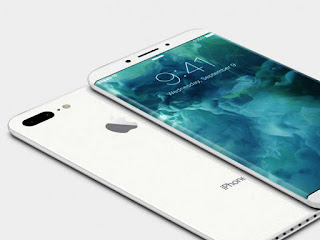 The other phone apple would be releasing will be the iPhone 8.

This phone would be a special edition phone which would contain all the amazing features. This iPhone will cost around $1000, which everyone would not be able to afford and would only be an exclusive model. It would most probably be named iPhone Edition.

It would not be having a home button!!! The Touch ID would be embedded inside the touch screen. This means there will be very fewer bezels. This phone will have a 5.8inch display. It would be the best looking phone available in the market.

This phone will be having an OLED display. The battery would be L-shaped in order to increase battery life. Wireless fast charging would be included in the phone. It will be having an Iris Scanner. Apple is also working very hard in order to develop a 3-D modelling selfie camera. This camera would identify the depth by calculating the time taken by the light to reach the camera from the source. The most amazing feature of this phone will be that there would be no separate fingerprint scanner instead, it would be embedded inside the screen.  Due to these new and exclusive features, this phone would cost around $1000

iPhone 7s would be released at the iPhone event around September. As iPhone 8 or the iPhone Edition would be having so many new features it is likely to be released later this year or even in early 2018.

That's it for today guys... Hope you liked it... iPhone edition is going to me amazing and we might have a giveaway when it is released!!!