It is a disturbance produced in a medium which passes through the medium without changing its shape and size.

There are 2 types of waves:

Characteristics of a Wave

Amplitude is the maximum displacement of the vibrating particle from the mean position. It is denoted by 'a'.

Frequency is the number of vibrations or oscillations in one second. It is denoted by 'nuu'. Its SI unit is Hertz or Hz

Wavelength is the distance between 2 consecutive compressions and rarefaction. It is denoted by λ (lambda) and its SI unit is metres. 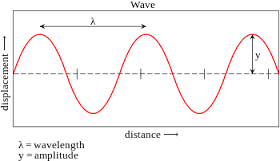 February 12, 2017
So, this is my second post on trigonometry. In this post we're gonna cover the reciprocal and the inverse Trigonometric functions. If you haven't seen my first post you should definitely view it as it covers the basics of Trigonometry The Reciprocal Trigonometric Functions The reciprocal Trigonometric function of Sine is Cosecant, of Cosine is Secant & for Tangent it is Cotangent. Cosecant (Csc θ = 1/Sin θ) or (Hypotenuse/Opposite) Secant (Sec θ = 1/Cos θ) or (Hypotenuse/Adjacent) Cotangent (Cot θ = 1/Tan θ) or (Adjacent/Opposite) We can also represent Tan θ in another way. As Tan θ = opposite/adjacent  & Sin θ = opposite/hypotenuse  & Cos θ = adjacent/hypotenuse ∴ Tan θ = Sin θ/Cos θ (The hypotenuses cancel out) As Cot θ = 1/Tan θ  So, we can also represent Cot θ as Cos θ/Sin θ.
1 comment
Read more

February 06, 2017
Rutherford Alpha Ray Scattering Experiment Hey, Guys, most of you might have heard about the alpha ray scattering experiment and if you want to know in detail about Rutherford's model and the experiment he conducted, this is the right place for you... But first: Things You Must Know Some basic information that will help you understand rutherford experiment properly: Proton is a sub-atomic particle which is positively charged and has a mass of 1u. Alpha particles are helium atom with a charge of +2 as they have lost 2 electrons. Alpha particles have an atomic mass  of 4u. Gold is highly malleable and can be beaten into very thin sheets. Experiment Rutherford conducted his experiment in the following way: Rutherford took a very thin gold foil and bombarded it with high energy alpha particles. He placed a layer of zinc sulphide on the walls where the experiment was taking place because when alpha particles strike zinc sulphide layer, it results i
18 comments
Read more

July 18, 2017
Hey there all the tenthees. You guys must be facing a lot of pressure as it is a board class as quoted by many teachers. You need to take care of each and every stuff including the small stats too. But unfortunately most of the Economics books we got do not have the graph 3 for the chapter Sectors of Indian Economy. No worries guys you came to the right place. We are providing you with the graph of December 2015 edition which is the latest graph which we need. All the best for your board exams and here you go Once again All the very best guys !!!
1 comment
Read more

June 24, 2017
messaging and texting is becoming a very easier and easier process nowadays as our typing speed has increased and delivering time is decreased.Speed entirely depends on us but ever wonder what actually happens to your typed message after you press a sent button. If not then its wonderful because today in this one we are going to discuss abut the same. So lets get started. TELECOM OF TEXTS  Actually the full path of your message after you have of-course typed it and press the send button can be simplified into a simple process which include many entities with different tasks to perform. well yes! that`s pretty much of the process and for the time being we would be continuing TO understand the same. HP 1 - Is considered to be the sender of the message or text. HP 2 -Is considered to be the receiver of the message or text of HP 1. BASE TRANSCEIVER STATION or BTS - {also known as cell sites}They are towers which are currently present in hundreds in your city or ev
2 comments
Read more
Follow @bhaveshjain8751