TOP 5 - '5 Most Powerful Objects In The Marvel Universe'

November 30, 2016
The marvel universe is full of entities of immense power (some of which can destroy whole worlds)
This list is comprised of the 10 most powerful objects in the MCU in my opinion ( comment your opinions below and I'll be pleased to read them)
Before we start off with this list, let me mention some honourable mentions which narrowly missed (one didn’t) getting on the TOP-5 list


This distinctive bow is too good. But what lets it be here isn’t the bow itself… it’s the quiver, the quiver which has a complete arsenal of ‘trick arrows’, along with the normal pointy ones. When Agent Barton is out of ammo or engaging a foe in close quarters, he uses his bow as a parrying weapon or like a kendo stick with varying degrees of success😁.


Loki’s sceptre has been seen many times in the MCU movies. With one of the infinity stones (mind stone) present in it. The sceptre made its appearance in Avengers, where it was given to Loki by ‘The Other’, a servant of Thanos. When it came in control of Hydra, Wolfgang von Strucker (a mad scientist), experimented the sceptre’s power on people out of which only 2 survived, Pietro and Wanda Maximoff, who became quicksilver and scarlet witch respectively.
The sceptre has immense power over the mind and can impose the will of the wielder on the victim, the infinity stone is currently on the forehead of ‘the vision’, after being used to give Jarvis the body.


This is an object of great power which made its first appearance in fantastic 4 comics, where the human torch, with the help of ‘Uatu the watcher’ steals the nullifier from the stronghold of Galactus(The eater of worlds, the devourer blah blah),Taa II.

Later it was used to frighten the Galactus to leave the earth by threatening to use the nullifier if he did not comply. It has made many appearances since… 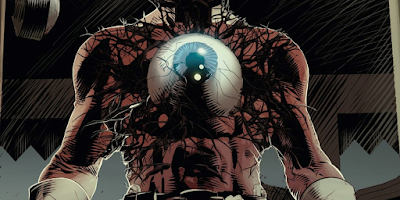 On a secret base on the moon, the watcher lives, and sees, everyone on the whole earth, so he knows a lot about the heroes of Earth, and is often targeted by supervillains because of this.


The watcher's knowledge and memories are stored within his eyes,

Thus when the watcher was killed and his eyes removed, the power

of the watcher's eyes were unlocked

The Watcher’s knowledge and memories are stored within his eyes,


thus when the Watcher was killed and his eyes removed, the power


of the Watcher’s eyes were unlocked, and many of the Marvel


heroes discovered terrible secrets such as the fact that the Human


Torch’s tampering with experiments was responsible for Ben


Thing, or the fact that the radioactive spider who bit Peter Parker

This eye may not be able to destroy planets, but the knowledge and


history of the marvel universe make it formidable all the same…


The Eye of Agamotto (I promise This is the last eye…)


Recently appearing in the doctor strange movie, there’s a lot to say about this eye. Rumoured to be found by Agamotto, the first sorcerer supreme and the greatest sorcerer of all time, among the stars. This also contains another infinity stone, the time stone, whose power we all saw in the movie.

The stone has the power to control time and can transport the wearer to the past, future, speed up time, slow down time and even create time-loops. It is passed down from sorcerer supreme to sorcerer supreme and was last owned by The Ancient One. Though in the comic books, as doc. Strange is the sorcerer supreme, he owns the eye.


The Infinity Gauntlet (with all stones)


This thing is one of the most powerful entities in the marvel universe. When Thanos wears this thing he is almost a deity, the stones complement each other and makes the bearer almost invincible…

The power stone Accesses all power and energy that will ever exist and can boost the other gems' effects. It duplicates almost any superhuman ability and grants the user Omnipotence

The soul stone at its max potential, allows the user to have control over all souls… dead or living      (we’re still left to see that one)

The time stone has already been described… just scroll above…

The reality stone allows the user to alter reality… even if in complete contradiction to the scientific laws,
warning: best used with other infinity stones too, if you don’t want to cycle through many alternate universes


The space stone grants the bearer the ability to exist in any or all locations, warp space, and transport objects through reality, at full potential, the stone grants omnipresence.

The Heart of the Universe


This is considered the most powerful entity in the Marvel Universe. Although it’s not canonically in the same universe as the comics focus on. In an alternate universe, Thanos used it to create many futures and created universes into existence. Although this object may never appear in movies because it is so overpowered…


Comment and share this, if this post does good, I’ll create a ‘5 more powerful objects in the Marvel Universe’ I would like to know your opinions in the comments section below, also leave tips on what I should write on next…

Have a MARVELous day!