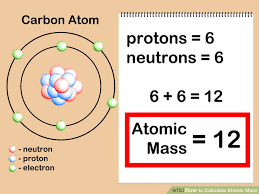 The average mass of an atom compared to the 1/12th mass of a Carbon-12 atom.

Elements and Their Atomic Masses